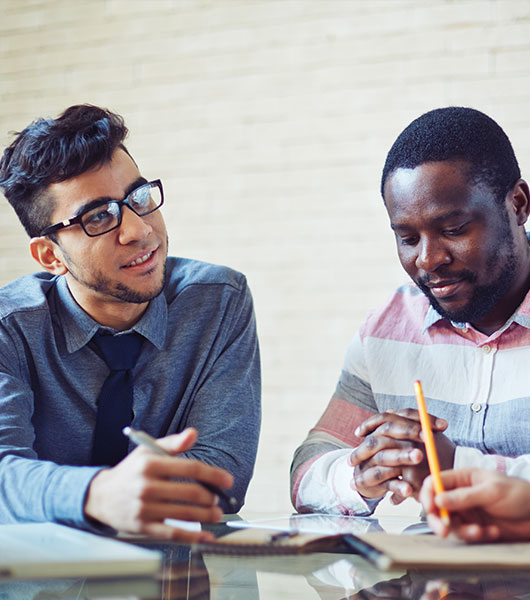 Python is a general-purpose interpreted, interactive, object-oriented, and high-level programming language. Its an high-level, interpreted, interactive and object-oriented scripting language. Python is designed to be highly readable. It uses English keywords frequently where as other languages use punctuation, and it has fewer syntactical constructions than other languages.


Python is Interpreted: Python is processed at runtime by the interpreter. You do not need to compile your program before executing it. This is similar to PERL and PHP.
Python is Interactive: You can actually sit at a Python prompt and interact with the interpreter directly to write your programs.
Python is Object-Oriented: Python supports Object-Oriented style or technique of programming that encapsulates code within objects.

R is a language and environment for statistical computing and graphics. It is a GNU project which is similar to the S language and environment which was developed at Bell Laboratories (formerly AT&T, now Lucent Technologies) by John Chambers and colleagues. R can be considered as a different implementation of S. There are some important differences, but much code written for S runs unaltered under R.
R provides a wide variety of statistical (linear and nonlinear modelling, classical statistical tests, time-series analysis, classification, clustering) and graphical techniques, and is highly extensible. The S language is often the vehicle of choice for research in statistical methodology, and R provides an Open Source route to participation in that activity.
One of R’s strengths is the ease with which well-designed publication-quality plots can be produced, including mathematical symbols and formulae where needed. Great care has been taken over the defaults for the minor design choices in graphics, but the user retains full control.
R, like S, is designed around a true computer language, and it allows users to add additional functionality by defining new functions. Much of the system is itself written in the R dialect of S, which makes it easy for users to follow the algorithmic choices made. For computationally-intensive tasks, C, C++ and Fortran code can be linked and called at run time. Advanced users can write C code to manipulate R objects directly. Many users think of R as a statistics system. We prefer to think of it of an environment within which statistical techniques are implemented. R can be extended (easily) via packages. There are about eight packages supplied with the R distribution and many more are available through the CRAN family of Internet sites covering a very wide range of modern statistics.

In the field of artificial intelligence (AI), computer science is being leveraged to create intelligent machines that more closely resemble humans in their functions. Having access to abundant knowledge, including categories, properties, and relationships between various information sets is the basis of the knowledge engineering that allows computers to simulate human perception, learning, and decision-making. For example, machine learning is a subset of AI that refers to computers programmed with algorithms that respond to new inputs after being trained on a different learning data set, resulting in their ability to act and react without being explicitly programmed to do so. Neural networks is a significant area of AI research currently proving to be valuable for more natural user interfaces through voice recognition and natural language processing, allowing humans to interact with machines similarly to how they interact with each other. By design, neural networks model the biological function of animal brains to interpret and react to specific inputs such as words and tone of voice. As the underlying technologies continue to develop, AI has the potential to enhance online learning, adaptive learning software, and simulations in ways that more intuitively respond to and engage with students.

Artificial intelligence (AI, also machine intelligence, MI) is intelligence displayed by machines, in contrast with the natural intelligence (NI) displayed by humans and other animals. In computer science AI research is defined as the study of "intelligent agents": any device that perceives its environment and takes actions that maximize its chance of success at some goal.Colloquially, the term "artificial intelligence" is applied when a machine mimics "cognitive" functions that humans associate with other human minds, such as "learning" and "problem solving". See glossary of artificial intelligence.
The scope of AI is disputed: as machines become increasingly capable, tasks considered as requiring "intelligence" are often removed from the definition, a phenomenon known as the AI effect, leading to the quip "AI is whatever hasn't been done yet."For instance, optical character recognition is frequently excluded from "artificial intelligence", having become a routine technology.Capabilities generally classified as AI as of 2017 include successfully understanding human speech,[5] competing at a high level in strategic game systems (such as chess and Go), autonomous cars, intelligent routing in content delivery networks, military simulations, and interpreting complex data, including images and videos

Machine learning is closely related to (and often overlaps with) computational statistics, which also focuses on prediction-making through the use of computers. It has strong ties to mathematical optimization, which delivers methods, theory and application domains to the field. Machine learning is sometimes conflated with data mining,where the latter subfield focuses more on exploratory data analysis and is known as unsupervised learning. Machine learning can also be unsupervisedand be used to learn and establish baseline behavioral profiles for various entities and then used to find meaningful anomalies.
Within the field of data analytics, machine learning is a method used to devise complex models and algorithms that lend themselves to prediction; in commercial use, this is known as predictive analytics. These analytical models allow researchers, data scientists, engineers, and analysts to "produce reliable, repeatable decisions and results" and uncover "hidden insights" through learning from historical relationships and trends in the data.
Deep and Machine Learning is likely to help bring in innovations to teaching and learning. Smart Flower recognition system is an example. This reminds of Genome matching databases etc that has been around for sometime. Innovations in technology with deep and machine learning would mean that there can be more novel applications, which allow students to say for instance, take a photo, research on information on that, communicate on that etc. Searches need not be restricted to texts. It could be by pictures, voices etc